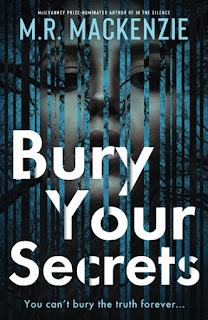 With his usual clarity, precision and way of drawing you immediately into a story, it doesn't take too long for M.R. Mackenzie to put names to the three women carrying a body to a shallow grave in the woods in the prologue of Bury Your Secrets. There are a few other elements that encourage you to read further, not least of which obviously is to find out who is dead and what went so badly wrong that the three ordinary young women on a break to a remote Scottish town need to bring a body to the woods in the dark of night.

If it turned out to be Hazel's errant and arrogant husband Matthew you wouldn't be surprised but it seems unlikely. Yes, he might have been caught on cheating on Hazel with a blonde secretary in their own bedroom, but he hasn't been invited on the girls' trip evidently and she doesn't seem ready to resort to murder. Rather, Hazel has teamed up with her straight-talking hard-drinking cousin Mickie, resettled in Edinburgh from Australia, and Claire, her rather straight-laced friend who has remained close from their university days to go for a much needed weekend break.

Hastily arranged for Hazel's birthday, the only option was for a Bank Holiday weekend is a friend's holiday home in Port Catrin, a small town on the Aberdeenshire coast. The town and the unwelcoming inhabitants live down to expectations, but it's a fancy house with a well-stocked drinks cabinet. And a handsome local Aidan, who helps the girls get out of a tricky situation with the more belligerent locals in The Slaughtered Lamb, or a pub very much like it. Unfortunately, the party doesn't exactly go to plan and, as we know, the girls end up with a a dead body on their hands that they need to dispose of in the woods. Some party.

The mystery of the secret that is buried in the woods however is only the set up for the bulk of what follows in Mackenzie's latest thriller. Only three people know what has happened that night, but three years later when it all seems to have blown over, an anonymous call made from a phone box on Prince's Street in Edinburgh sets the police once more on the trail. Thereafter, Bury Your Secrets becomes more of tense psychological thriller than the murder-mystery investigation that is more typical of this author in his Anna Scavolini mysteries.

In other respects however, Bury Your Secrets is a classic M. R. Mackenzie crime thriller; tightly plotted with strong characterisation, authentic motivations and behaviours, mixed in with the requisite dose of suspicion, paranoia and murder most foul. There are lots of movie references in tribute to classic cinema, with Hitchcock foremost of course when it comes to questions of crime and guilt. With its particular blend of Scottish humour and character and a fine ear for dialogue this is up there with Chris Brookmyre and classic Val McDermid, but with a character that is very much Mackenzie's own.

Originally developed as a film script before embarking on his Anna Scavolini series, you might notice similar character types in different guises in Bury Your Secrets. Mickie, despite supposedly being of Australian origin is curiously more Scottish in her character and speech than the others and bears a certain similarity in this respect to the straight-talking, outspoken and impulsive Zoe Callaghan (Cruel Summer). Where this plays out differently here is in how she and each of the other character types react and bounce off each other, and although as individuals they have distinct personalities, it's in the dynamic between them - with Shonagh later skewing that dynamic further - that the real fascination and strength of the novel lies.

Just as significant is the fact that this time the narrator is a killer, and that presents an interesting perspective on the kind of guilt, paranoia and fear that someone who has committed a crime has to live with as well as the strange and otherwise out of character behaviours it brings out. It's a challenge that Mackenzie meets well, considering all the angles, the killer and the victims, while still managing to remain focussed primarily on delivering a very readable and exciting thriller.

Reading notes: Bury Your Secrets by M.R. Mackenzie is published by Mad House and is available in paperback and eBook formats. I read the Kindle version from Amazon UK. I couldn't find a way of working it into the review, but I laughed out loud at 'Aye Choons' for the name of of a Scottish record store, which is a good example of the kind of humour employed in the book. Love the cover.

Popular posts from this blog 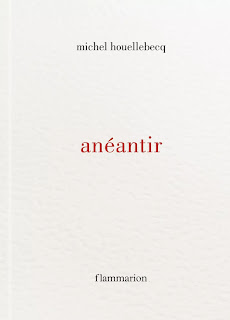 If you can get past the undisguised contempt for bourgeois family life and morals and the copious graphic descriptions of sex, you will find that Michel Houellebecq often has something pertinent, premonitory and usually pessimistic to say about the state of the world we are living in. For me he sometimes misses the mark, but when he gets it right - in Plateforme , in Sérotonine - he casts the rest of the conservative French literary world into shade. With its provocative title, his latest Anéantir (Annihilate) is in some respects typical of Houellebecq's cynical view of individuals, family and society, but there is a noticeable change of tone here and some kind of acceptance that the issues he grapples with are far more complicated  and important to deal with than just through his personally tainted perspective. It takes a while and a few dead-end plot developments for Anéantir to find its focus and purpose - which I guess is probably true to life itself. The story is set in the
Read more 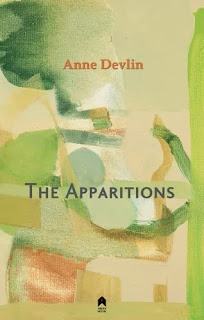 You probably shouldn't look for a single overarching theme much less a through-narrative in a diverse collection of short stories, but in the case of The Apparitions , Anne Devlin's first collection in over 35 years, such is the coherency of the themes that each reader could find something unique and personal within it. The title story of the collection Winter Story (The Apparitions)  indeed clearly sets the tone for what is to follow, in a meeting between a man and a woman who only know each other from a passing familiarity when they both went to or worked in the same bar many years ago. The story, and what follows, becomes a gathering together of impressions and memories, of travels and personal journeys, the people and the things that have stuck with us over the years that float back in the memory like apparitions, demanding that we take notice of them. The best short stories work this way, not relying on narrative as the sole means of telling a story but seeking to find an
Read more